We put our resources and skills into programmes to prevent and reduce alcohol misuse by working with others to raise awareness and change people's attitudes and behaviour.

You could lose everything the moment you choose to drink and drive. 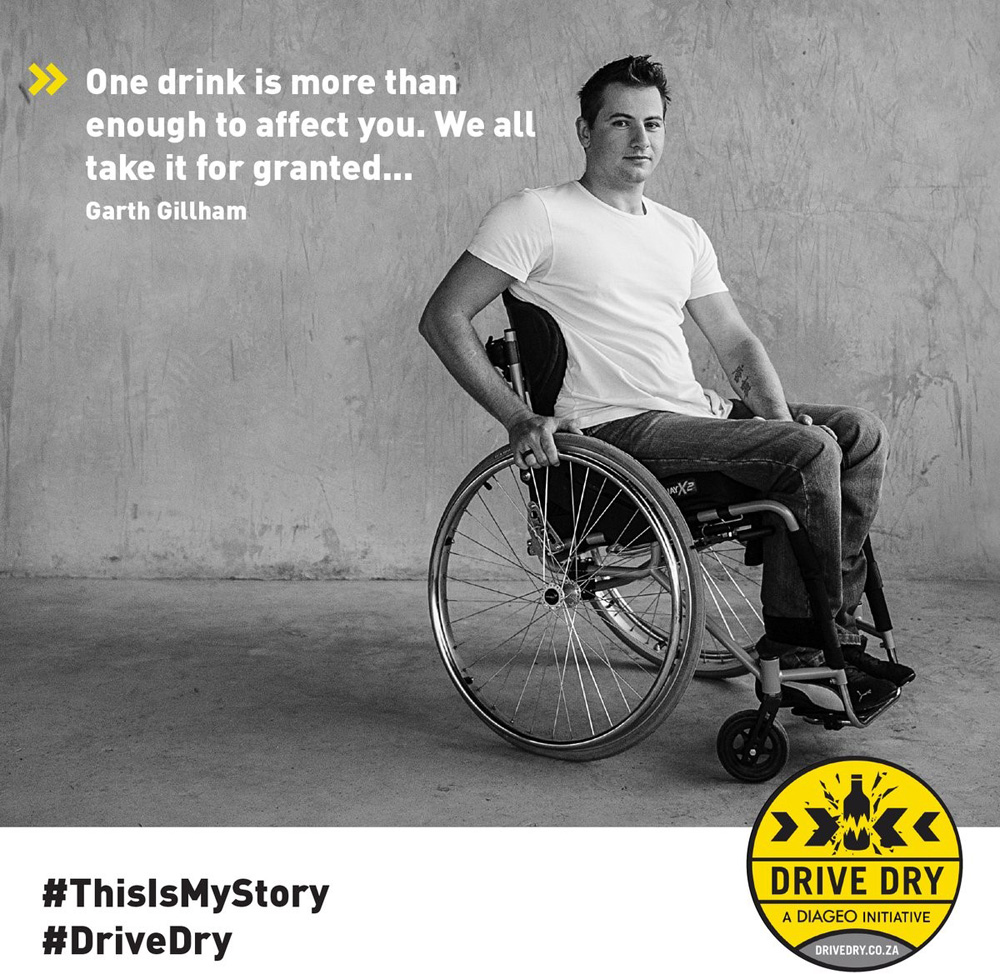 To address this challenge, Diageo conducted extensive consumer research to gauge consumers’ attitudes towards drinking and driving. The insight gained was that many 18-25 year old consumers (18 – 25 year olds who either have their own car or have access to a car, and who drink alcohol socially) believed that being involved in an accident or being arrested and getting a criminal record as a result of driving drunk “won’t happen to me".

Our research also indicated that even if people drive when they are over the limit, they don’t believe that anything bad will happen to them. In response to this, Diageo launched its Drive Dry campaign, adopting the tagline: “It won’t happen to me” to provoke thought around the issue and to discourage consumers in a hard hitting way that it can in fact happen to them and they shouldn’t drink and drive. The overall message also speaks to all other South Africans, outside the primary target market.

Research showed that gory accident scenes have little effect, so this campaign confronted consumers with the kind of scary and dangerous people (such as hardened gangsters and dodgy tow truck drivers) that may be out on South Africa’s roads at night, just waiting for them to drive drunk. The aim was for consumers to realise that meeting these very real people could potentially be much worse than having an accident. This was an innovative and in some cases controversial angle on a personal issue, which was developed specifically to shift people’s perception of the risks involved in driving drunk, and to target both male and female consumers.

Our strategy is not simply to raise awareness but to change consumer behaviour: to never drink and drive again. The research (News24.com online survey) we did showed that 88% of South Africans say the fear of being arrested and sent to jail for drunk driving encourages them not to drink and drive. It supported the rationale behind the campaign, which is premised on the fear factor and the belief that the prospect of arrest and incarceration is a powerful deterrent to drunk driving.

Foetal Alcohol Spectrum Disorders (FASD) is a reality in many farm worker communities, particularly in the Western Cape. Since their inception, the Pebbles Project strives to support the children in these communities who are affected by FASD. In addition to their special needs education programme, they run FASD awareness workshops for women of childbearing age and teenagers, trying to reduce the number of children born with FASD.

Our involvement for Mandela day involves employees participating in a baby box drive. The concept is that expectant mothers are given a baby box, with the ultimate goal of not only reducing infant mortality rates, but also to reduce the number of children born affected by FAS within the farm worker communities of the Western Cape. We will provide the goodies to pack in the boxes.

Transport will be provided for employees who wish to participate in the handing out of the baby boxes.

In partnership with Provincial Liquor authorities, we provide taverners with training on responsible use of alcohol, the importance not selling alcohol to already intoxicated patrons and children below the age of 18.

We also encourage taverners to contribute toward charitable organisations in their communities.

We work with NGO’s to educate the youth about the dangers on dangers and consequences of alcohol abuse. We empower them with tools to deal with peer pressure to encourage abstinence till Legal Drinking Age.